It is said that when you begin to develop your senses, a new and fascinating world opens before you; the hidden world suddenly unveils itself – your perception heightens and your thoughts and feelings are expressed before your very own eyes in color and form.

There is more to the human body than the physical body. Unfortunately, most people consider the physical body and the material world to be the only reality that exists. They believe this because for them, these are the only things that can be discerned with their own physical senses, and I might add, understood by their rational mind. But there are numerous energy bodies within and around the human body. These energy bodies are:

1. The ethereal body
2. The emotional (astral) body
3. The mental body
4. The spiritual body

Each energy body possesses its own vibrational frequency, from the lowest (ethereal) to the highest (spiritual).

In addition, there is a complex energy system that is at work, which the body could not exist without. This energy system consist of energy bodies, namely:

1. the chakras the (or energy centers)
2. and the nadis (also known as energy channels)

Nadi is a Sanskrit word meaning, “pipe” or “vein.” Nadis are akin to a network of channels or arteries that transport prana (vital energy) throughout the human being’s energy system. 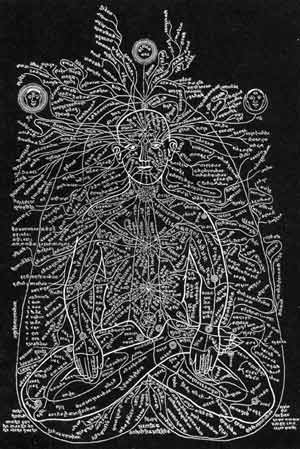 The above illustration depicts the chakra system
and the large number of secondary chakras,
including the complex network of nadis.
These nadis unite into 14 main channels,
which correspond to the main
primary and secondary chakras.

Ancient Indian texts say there are 72,000 nadis in the human body, whereas other archaic texts speak of 350,000 nadis. The most important nadis are called the (1) sushumna (2) ida, and (3) pigala. The nadis of one energy body are connected to the nadis of the neighboring energy body via the chakras.

Chakras are energy centers. They function like receivers and transformers of the various forms of prana. Through the nadis, the chakras take in the vital energy and transform it into the frequencies needed by the various areas of the physical bodies for sustenance and development.

Each chakra is connected with one of the elements of earth, water, air ether and mind – mind being an instrument of consciousness. These elements are states of matter and NOT elements as we understand them in modern chemistry. They are equivalent to the terms: solid, liquid, fiery or gaseous, airy, and etheric – which are somewhat analogous to the physical, astral and mental planes and sub-planes.

Chakra is a Sanskrit word, meaning, “wheel.” The human chakras are “wheel-like” vortices, or saucer-shaped depressions that exist on the surface of the etheric human body.

Traditional writings say there are 88,000 chakras in the human body. Most are extremely small and play a minor role in your energy system. However, there are approximately 40 secondary chakras that are of significance; these are located in your spleen, the back of your neck, the palms of your hands and the soles of your feet. But for brevity purposes, we will only explore the seven (7) primary chakras here. 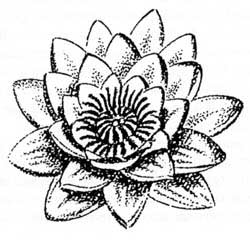 If we look down into the bell of a convoluted-type flower, we would get the general appearance of a chakra.

The seven primary chakras are located along a central vertical axis of our spine and open toward the front of the body like a blossom (see Figure 2 below). These circular energy centers are in constant motion, rotating, attracting energy – receiving or radiating.

At the center of each chakra, in its deepest point, is a stem-like channel that extends to the spine and merges with it, thus connecting the individual chakra with the sushumna (the most important energy channel) which ascends within the spine to the top of the head. More on that later. 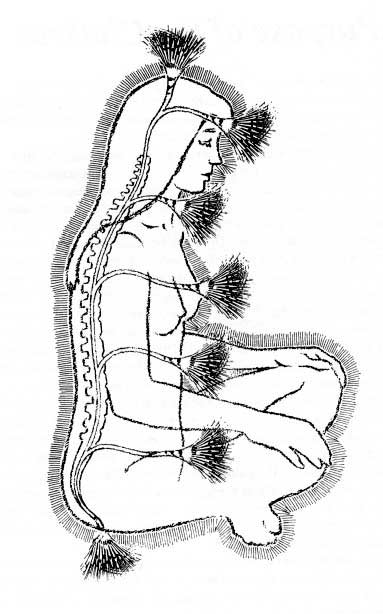 FIGURE 2
Like a flower, a “stem” branches out from our spine into the shape similar to that of a lotus flower. Think of our spine like a central stem.

For most people, the chakras extend about four inches in all directions from their point of origin. When undeveloped, they appear as small circles about two (2) inches in diameter, but when awakened, they are blazing, shimmering whirlpools akin to miniature suns several inches in diameter. As one’s development advances, their chakras will extend further from the body, their frequency vibrations will increase and their corresponding colors will become clearer and brighter. 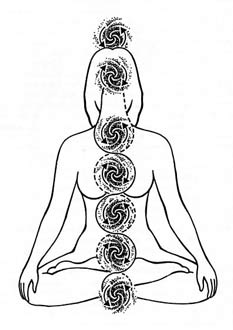 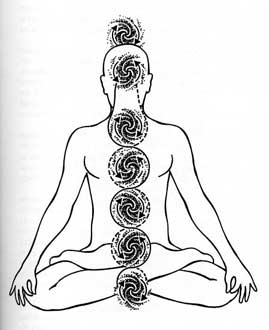 The Seven Primary Chakras in the human body are: 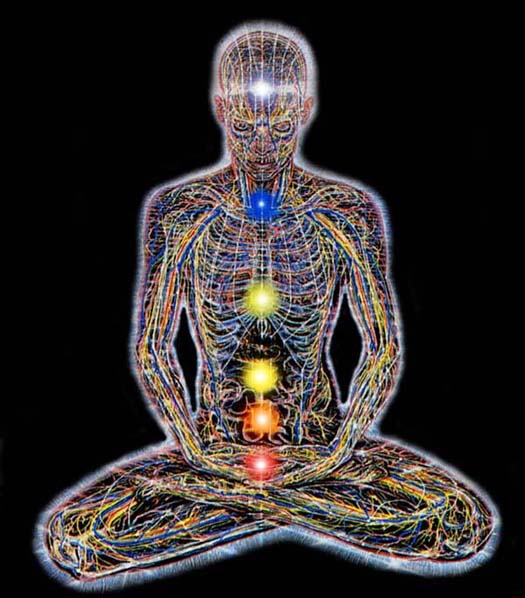 The 1st chakra is called the Root chakra. It is located between the anus and the genitals and is connected with the coccyx. The Root Chakra opens downward. When active with vigor, it is fiery red-orange in color.

The 2nd chakra is called the Sacral or Spleen chakra. Located over the spleen, it is sun-like in color and opens towards the front. Sanskrit books always substitute the 2nd sacral chakra with that of the spleen, locating it below the navel instead of at the spleen. My research suggests that there is a danger associated with tampering with the spleen, so perhaps this is why they locate it below the navel. I don’t know.

The 3rd chakra is called the Solar Plexus chakra. It is located about two finger-breaths above the navel and is directly connected to our astral or emotional body. Through the solar plexus chakra we absorb the solar energy which nurtures our etheric body, which energizes and maintains our physical body. This is where our emotional (feeling) energy radiates, particularly our “gut feelings.” It glows a golden color.

The 4th chakra is called the Heart chakra. It is the center of our entire chakra system. It is located in the center of the breast at the level and vicinity of the heart cavity and connects the three LOWER physical and emotional centers to the three HIGHER mental and spiritual centers. Its color is chiefly green.

The 5th chakra is called the Throat chakra. It is located between the depression in the neck and the larynx, beginning at the cervical vertebra behind the Adam’s apple. It starts at the cervical vertebra and opens towards the front. It is also connected to a small secondary chakra, which has its seat in the neck and opens to the back, but since the two chakras are so closely related, they have been integrated into one. Although it has a lot of blue about it, it is also silvery, like moonlight upon rippling water. Blue and green predominate.

The 6th chakra is called the Third Eye? chakra. It is associated with the pituitary gland, which is a very small, shapeless organ about 1/8 inch in diameter located in the forehead about one finger-breath above the bridge of the nose between the eyebrows. Here conscious perception of being takes place. It is the seat of our higher mental powers. On the physical plane, it is the highest center of command for the central nervous system. One half is chiefly rose-colored with a lot of yellow, and the other half is predominantly purplish-blue.

The 7th chakra is called the Crown (Third Eye?) chakra. It is seated in the pineal gland, which is a small organ of fleshy consistency not much larger than the pituitary. The pineal gland is located near and behind the pituitary body almost in the exact center of your head at the level of your ears. The Crown Chakra opens upward, at the top of your head. Interestingly enough, medical science has yet to conclusively determine the physical influence this gland has on the human body (probably because metaphysics is beyond their rational thinking mind.) Although it contains all sorts of prismatic hues, it is predominantly violet.

A FEW WORDS ABOUT THE CROWN CHAKRA

The Crown Chakra is usually the last to be awakened. It is the same size as the other chakras but as the person progresses on the Path of spiritual advancement, it increases steadily until it covers the entire top (crown) of the head.

Like the other chakras, at first the Crown Chakra is a depression in the etheric body and the divine force flows in from without. But when the person realizes his position as the king of the divine light through development of this chakra, the Crown Chakra reverses itself and turns itself inside out! In other words, it no longer is a channel of reception but a channel of radiation; it no longer is a depression but a prominence above the head – it radiates outward like a dome, like a crown of glory! 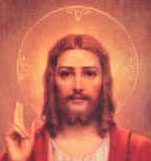 This illuminated Crown chakra is symbolically represented as the halo above and around the heads of so-called Saints that are glorified on the walls and stained glass windows of churches, and this includes the halo that crowns Jesus Christ! It is an ancient truth that is still used in Christianity today. Sadly, however, its original purpose has been long ago forgotten, or lost – until now!

Now you know the hidden meaning – Truth – behind this symbol.

Yes, this is THE Truth!

Each chakra is perpetually rotating. At the mouth of the chakra, a divine force from the higher world flows. Without this inrush of primary energy, the physical body could not exist.

The chakra centers are in constant operation in all of us. In the undeveloped person, they are usually in sluggish motion, just forming the necessary vortex for the force to enter, and not much more than that. However, in the more evolved person, they may be glowing and pulsating with living light so that an enormous amount of energy passes through them. 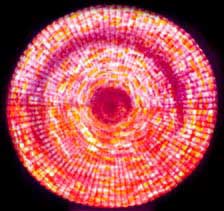 All the petals have a shimmering effect, like the mother-of-pearl, yet each has its own predominant color. This silvery aspects is likened in Sanskrit works to the gleam of moonlight on the surface of the water.

Why are colors associated with the chakras?

Each chakra contains all color variations, although one color always dominates. These colors correspond to the primary task of the chakra. Each globule that I spoke of earlier consist of seven (7) atoms. When these brilliant specks of light are drawn into the vortex of the 2nd (sacral or spleen) chakra, they are decomposed and break up into streams of different colors. As these seven (7) atoms are whirled around the vortex, each of the six spokes of the 2nd chakra seizes upon one of them so that all those charged with yellow flow along one spoke, those charged with green along another spoke, and so on, while the seventh atom disappears through the center of the vortex, or hub of the wheel. These rays then pass off in different directions, each ray destined to its special work in vitalization of the body.

Figure 3 below is a diagrammatic representation of these paths of dispersed prana. 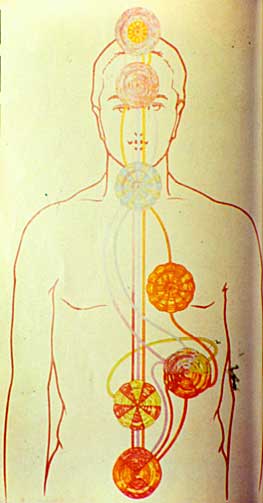 FIGURE 3
It is important to note that the divisions of prana are not like what we normally see in the solar spectrum but resemble the arrangement of colors we see on the higher levels in the causal, mental and astral bodies.

For example, indigo is divided between the violet ray and the blue ray.

Red is divided into two — rose-red and dark red.

Consequently, the six atom radiants are: violet, blue, green, yellow, orange, and dark red, while the 7th, or rose-red atom passes down through the center of the vortex.

So it should be no surprise that here is a certain correspondence between the colors of the streams (flow) of prana and the chakras. These streams are:

12 thoughts on “THE HUMAN CHAKRA SYSTEM”